John Viscogliosi, Former Chairman & CEO
A healthy neck and lower back is a pre-requisite to a golfer’s success. The lower back, sandwiched between the two most vital mobile joints, the hips and the thoracic spine, is meant to provide the golfer a strong core and stable base, to power the club through the ball. With an unhealthy back, a golfer exerts enormous pressure on the lumbar spine, precluding him or her from generating adequate torque and rotation in the golf swing.

It’s this incessant pressure on the cervical and lumbar regions of the spine that has resulted in neck and lower backache to emerge as a universal predicament among golfers. Case in point Tiger Woods, who has undergone four back surgeries in the span of a few years. Centinel Spine, the only orthopedic solution provider in the world that offers patients both lumbar and cervical total disk replacements, is helping athletes alike prolong their careers by overcoming chronic neck and back ailments. Just ask Rory Sabbatini, a former Masters runner-up, or Brian Gay, a winner of four PGA Tour titles, the lasting impact of Centinel Spine’s products.

Sabbatini, who spent 22 weeks as a top-10 player during the 2007- 08 season, was convinced that his worsening cervical spine had prematurely ended his professional golf career. That was until Sabbatini had one of Centinel Spine’s prodisc® Total Disc Replacement devices implanted in his cervical spine. “The reason our products get chosen by high profile athletes is because their doctors recommend our motion preserving or Integrated Interbody™ fusion products. They know our devices won’t fail the active individual,” says John Viscogliosi, the former chaiman & CEO of Centinel Spine, the largest privately-held spine company focused on anterior column reconstruction.
One of Centinel Spine’s unique fusion products is STALIF L™, the first FDA-cleared, minimally invasive surgical (MIS) lateral lumbar Integrated Interbody system with compressive lag screw fixation. The STALIF L Integrated Interbody fusion devices are primarily designed to maximize lumbar fusion for surgeons. According to Viscogliosi, surgeons saw the need for optimized compressive fixation, for improved fusion to occur. “Our Integrated Interbody cages, which come with screws, provide compression, and that allows for bones to fuse together,” says Viscogliosi, before explaining that while similar products in the market focus on keeping the interbody cages in place, the STALIF L line is different because the screws and cages co-function to create better fusion.

On the surface, Centinel Spine’s primary focus is to provide prominent surgeons with “anterior access spinal solutions.” Its suite of fusion and motion preserving devices is so advanced that it can be customized based on the anatomy of a patient. While market competitors offer a “one-size-fits-all” device, Centinel Spine takes pride in providing multiple designs for the bone-implant interface.

The turning point for Centinel Spine came in December 2017, when the West Chester, PA-based organization acquired the prodisc Total Disc Replacement portfolio of cervical and lumbar artificial disc systems from Johnson & Johnson. The prodisc platform, acknowledged as the most implanted arthroplasty system in history, is the only total disk replacement platform for both the lumbar and cervical spine. After acquiring prodisc, Centinel Spine tripled its employee count from 30 to 106. More importantly, however, Centinel Spine upgraded its product portfolio in a way that surgeons can now address patients with either a motion preservation or fusion solution. “We can now provide prodisc solutions to thousands of new patients, who would have otherwise never had access to it. We took a dying product and turned it around,” adds Viscogliosi, who holds over three decades of operations and turn-around experience in the orthopedic industry. 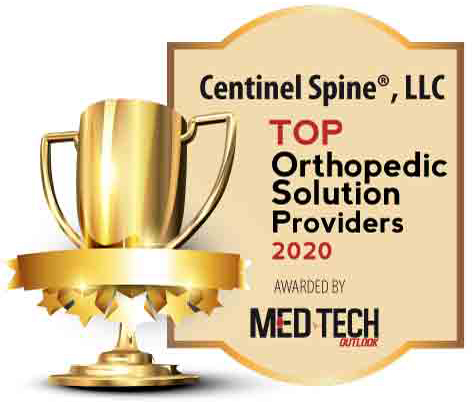 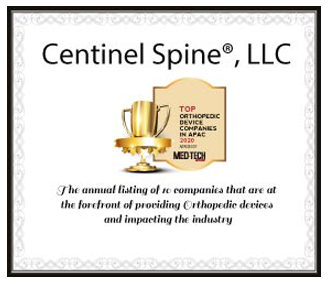